MEAN LEFT HOOK: A vehicle with the right of way is usually moving faster, so when it hits a scooter, it tends to cause more serious injuries, with a death rate of 1.39 percent

Although scooter riders in the past few years have called for the removal of the two-stage left turn rule, scooters that directly turn left without using a hook turn tend to sustain more injuries in an accident, the study showed.

In a hook turn, motorcyclists wishing to turn left must first go to the right-hand side of the intersection with the road they wish to turn onto and wait in a designated spot for the light to turn green. 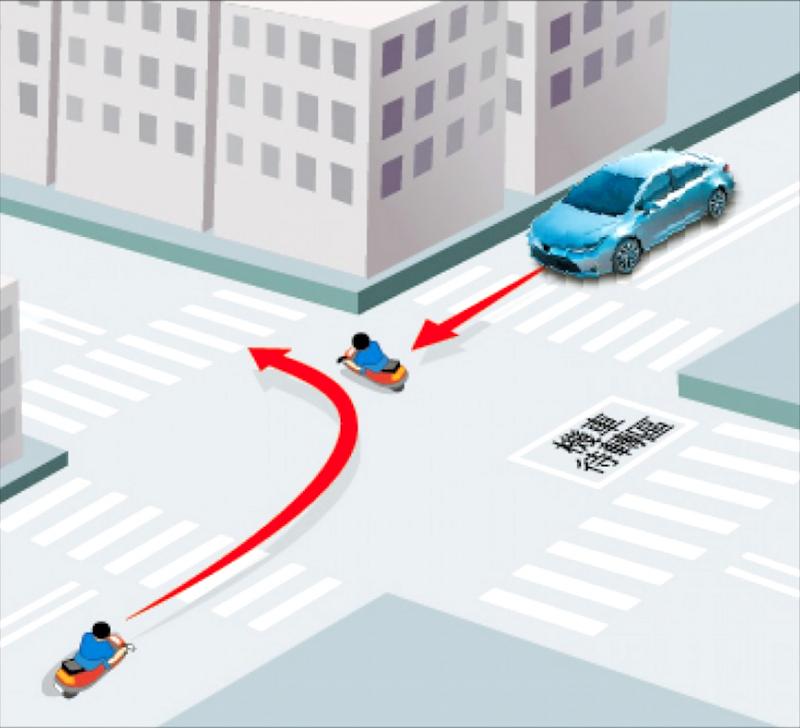 An illustration of an intersection warns scooter and motorcycle riders against making a direct left turn.

A research team led by Pai Chih-wei (白志偉), a professor in the university’s Graduate Institute of Injury Prevention and Control, examined data from the National Taiwan Crash Database and the National Health Insurance Research Data from 2003 to 2015, comparing the severity of injuries sustained by scooter riders in two types of traffic accidents.

Compared with being hit by a left-turning vehicle crossing into a scooter’s right of way, crashes that occur as a result of a scooter entering a vehicle’s right of way results in an additional injury rate of 58 percent, 20 percent and 73 percent in the head, neck, and chest and abdomen respectively, the study showed.

A vehicle with the right of way is usually moving faster, so when hitting a motorcyclist, it tends to cause more serious injuries, with a death rate of 1.39 percent, according to the study.

Analyses using logistic regression models revealed that the combined chances of death and severe injuries in an accident where a vehicle has the right of way are 2.7 times higher than the other way around, it said.

Although data showed that more accidents involved a left-turning vehicle colliding with a scooter, the chances of severe injuries caused by this type of accident are much lower, it said.

Several cities and counties have reduced the number of intersections requiring hook turns due to complaints from scooter riders that those turns are time-consuming.

The study was published on the international journal Accident Analysis & Prevention in May last year.